Thankfully today Israeli soldier Gilad Schalit’s physical ordeal is over (I say physical because, after five years of Hamas captivity, I’m sure there’ll be various emotional and psychological issues to deal with). The cost is one thousand Palestinian prisoners, half of them exchanged today, the rest in a few weeks.

From a pragmatic Western perspective Israel’s longstanding policy of getting its soldiers back no matter what, even if it means exchanging them for hundreds of Palestinian militants or terrorists, represents a fundamental military and security weakness. That Israel is prepared to engage in such exchanges even to retrieve the remains of dead soldiers merely compounds that point. It is a policy which is frequently exploited by Palestinian leaders, knowing that if a terrorist operation goes wrong and cell members are captured, or a suicide bomb vest fails to detonate, they’ll eventually get them back through a prisoner exchange like today’s (a somewhat raw deal, it must be said, for the failed suicide bomber sent back to have another go). I’m not aware of any country that shares Israel’s policy of getting its soldiers back no matter what… it simply ties a military’s hands.

And therein lies a fundamental difference between Israel and Hamas. One has such little value for its own people that it has no compunction whatsoever in sending them on suicide missions to kill and maim Israelis. The other values the life of one of its own so much it will exchange hundreds of prisoners, many of them terrorists responsible for breathtakingly evil acts, all to save one young Israeli conscript.

Yet despite the phenomenal asymmetry of the exchange, Israel’s most vociferous detractors still – somehow - manage to use today’s events to berate Israel by bemoaning the attention given to a solitary Jew over a thousand Palestinian prisoners. Some Palestinians, too, have expressed anger at the notion of one Jew being worth a thousand Palestinians. I guess they’ll have to take that up with their leaders who drove the bargain. Personally, I can’t help but wonder if, deep down, some of those Palestinians released today wonder why their leaders didn’t do more to seek their release, or what it feels like to be valued by their own side as a mere thousandth of a Jewish life. It’s not just about the terms of the deal, but also how one of the two mobilised to campaign and worked tirelessly for Shalit’s release, managing to keep him in the world’s spotlight for five years. Or perhaps Hamas actively discouraged such campaigns back home, knowing too much media attention would remind the world of the atrocities some of those people imprisoned in Israel had committed.

Today’s deal, of course, has come at a great price, resulting in the release of some notorious characters, and attempts by Israel’s detractors to portray all of them as mere “political prisoners” is unacceptable. One of those being released - Ahlam Tamimi -was responsible for a bombing in a pizza bar which killed fifteen people (another is still in a coma). When she learned eight of those killed were children, she smiled. Another appeared in the shocking picture taken in Ramallah in 2000, proudly holding aloft his blood-stained hands in glee from a window to the crowd below while a lynch mob behind him finished the job of killing two reservist Israelis who had taken a wrong turn (both had their eyes gouged out and were disemboweled). Some others being released were responsible for other atrocities. Compare this with Gilad Shalit, a mere conscript who was kidnapped. 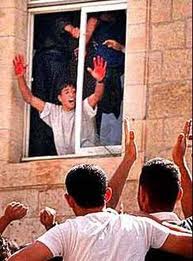 Thus, this aspect of the deal must be very difficult for Israelis (though a poll suggests 80% back it). This morning I watched one Israeli father who had lost his army son to an attack by Palestinians explain how, despite the high price, it was right for the exchange to take place so that another family did not have to experience the loss of their son as he had. His view was all the more poignant because two of those being released as part of today's deal are his son’s killers.

For its part, Hamas considers this a glorious victory, and politically speaking in Gaza and across the Islamist world it is (much to the chagrin, I’m sure, of Fatah). It has successfully secured the release of people with blood on their hands, many of whom will undoubtedly go back to planning and carrying out the murder of more Israelis in the future.  Thus, while I admire (though despair at the naivety of) genuine Christian efforts at peacemaking in the region, it is very, very difficult to see how one can make peace with such people. The views expressed by Ahlam Tamimi in the interviews described in the link above, or the pure hatred behind the Ramallah lynching and how it was carried out, surely demonstrates this.

Since writing this post I've learned of a comment by Mike Moore of Christian Witness to Israel (CWI). I've never met Mike but in the last few days I had the pleasure to chat with him by 'phone for the first time and look forward to meeting him at some stage. He's just posted his own take on today's news and provides more details of some of those being released, together with thoughtful comment. But what really struck me was the phrase "sacrificing their own children" in the penultimate paragraph, which immediately evoked memories of references to child sacrifice occurring in the land in Old Testament days. I've not quite considered it in that light before and it's a point well worth considering theologically. Mike's post is available here.
By Calvin L. Smith at 17:14

Thank you, Mr. Smith. I found yours to be an excellent post, and a tragically accurate assessment of just a fraction of what has recently taken place. We'll know much more in the coming months, I'm afraid.

Thank you for devoting your time to such an important event and issue - and doing it well.

Thanks for your sane, common sense. Just looking at Gilad Shalit: weak, painfully thin, dazed, I personally am so happy that the Israeli's negotiated his release. I am not interested in reading about any of the Palastinian prisoners. Those people will cut off the head of a live person, to wit: Nick Berg and Daniel Pearlman. They're crazy and I am so happy for Gilad's family. No telling what those crazies had in store for this young man.