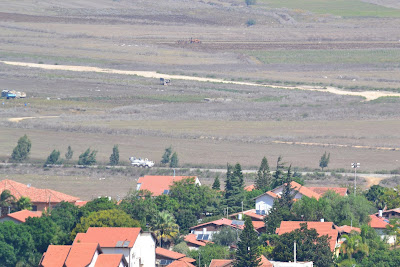 Last night three rockets were fired at Israel from Gaza, the first since the Gilad Shalit exchange. Typically,  it went largely unreported in the West. Yet the security issue lies at the heart of the Middle East conflict (not the only issue, but a core consideration nonetheless). Israel is simply not going to negotiate anything away - land, blockades, checkpoints - until it can guarantee its own security. Neither are we talking about home-made rockets here; both Hamas and Hezbollah are currently being armed by Iran, and all three openly seek the destruction of the Jewish state.

"Leave it to the UN and the world to guarantee Israel's security," some say. "Let's demilitarise the region and reach peace accords". The problem is, Israel doesn't feel it can rely on the UN. Remember how, after the 2006 Lebanon War, UN troops were stationed along the Israel-Lebanon border to calm the situation and guard the region? Last month I took the photo above during a visit to the border. Note the Israeli homes right up to the border. The road behind them (lined by some fir trees) is in Lebanon. And if you look carefully you'll see a solitary white-painted UN armoured vehicle. From our various vantage points high up this seemed to be the story along much of the border. It hardly inspires confidence.
By Calvin L. Smith at 13:33

And look what has just happened to Israel at the UN security council. Israel can't rely on the UN at all.